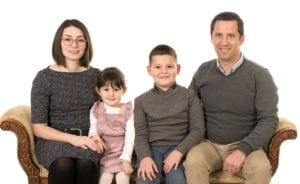 From Bihor country, Sandu and Marinela have been in Namibia from October 2013 being sent on foreign missions by Filadelfia Church from Oradea.  Both got to know God attending the church and experienced the new birth in their teen age. They got married in 2008 and God blessed them with two children, Luca Ionatan and Tania Alexandra.

After one and a half years of marriage, Sandu and Marinela asked God: “What do You want us to do for You now once you brought us together as a family?” God spoke to them about the need for workers in the unreached tribes of the world. In their journey towards mission, they understood the important role of equipping for ministry and in 2010 they enrolled in the Romanian Centre of Cross-Cultural Studies where they studied for two years. In Namibia, they are engaged in church planting and Christian education planning to open a Christian kindergarten in a poor community in the area where they live.